Perennial cut down commences in earnest in October

Can I cut down my peonies now? What about daylilies? They're looking kind of worn and so are other things. I would have liked to cut them down when it was nicer outside but I was told it's too early, that cutting them then would make them grow back and waste energy.

One more thing. We have a shredder and plan to shred the leaves from the trees and also shred the garden stuff. Anything we should know?- J.H. -

Cut away. Shred it up!

By Halloween we've been cutting back perennials for over two months, since late summer nights turned from hot to cool. We cut whenever we didn't like a plant's looks anymore or when we saw discoloration indicating disease. For instance, we clipped peonies down to the ground that have purple-brown splotches or streaks on the leaves or stems. It spread out the garden clean up and is the simplest way to stay ahead of fungal diseases that develop on peony buds and leaves. Those fungi would have worked their way to the root but we didn't give them enough time.

(This is not a fall-only tactic. We cut ruthlessly all season in pursuit of good looks and good health. For instance, we mow down daylilies all through the season, whenever they look shabby!)

Right: Daylilies in our care may wonder what they've done to deserve such rough treatment. We razed this bunch in late July when they looked shabby. Here they are October 2, grown back and looking lush.

Seven minutes later they're razed again. Before the season truly ends in late November's freezes, these plants will grow again and be a few inches high. They won't be hurt by the effort. Meanwhile, we taken them out of the way as we cut and edge. 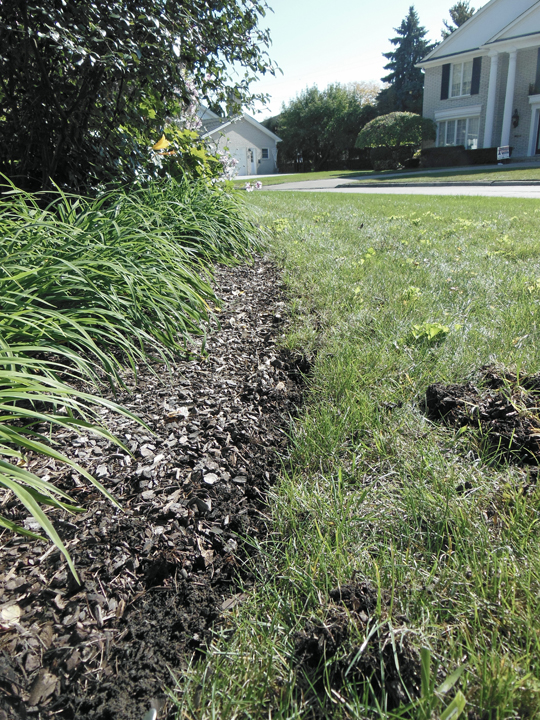 We cut to eliminate things that are in the way. Also, if something isn't contributing to a composition, it's probably detracting. Cut it out of the garden like you'd crop it out of the photograph.

Cut to learn wait-ers from growers

Fall garden clean up is about equal parts science and art, best learned by doing. Cut, and watch! You won't kill anything by cutting but in the doing you will learn how the various plants behave and look. For instance: 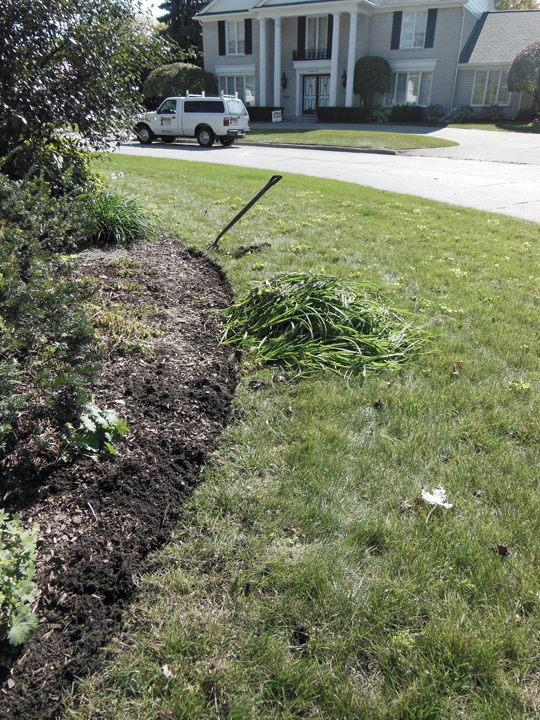 Below, right: Bee balm (Monarda didyma) is always growing new from its base. No matter when you cut it back, this plant will say, "Hey, I wasn't done yet!" Yet there's no harm done if you cut it when you will.

By the time tree leaves begin to fall, some perennials have been touched by frost or browned out. Gardeners have no qualm about cutting them.

Others remain green. It's those that give people pause.

The thing to keep in mind is that in fall, what's green today can be blackened by frost tonight. Ma Nature doesn't ask a plant's permission and the abrupt end doesn't hinder regrowth in spring or during a long fall. Follow Nature's lead: Cut whenever you choose to cut rather than waiting for some sign from the plant. 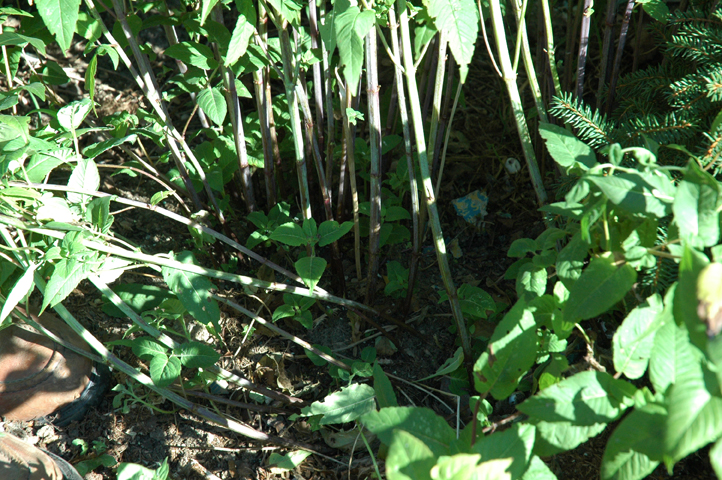 Any new foliage that appears after a cut is not a problem, not a waste, and doesn't affect our reasons for cutting in the first place -- to remove potential trouble and also clear the field so we can see better to weed and divide.

Bonus: To shred what you cut

That's great to have a shredder. Using fall leaves as mulch saves on yard waste bags and recycles in place the nutrients a tree used in leaf production. It also reduces the amount of mulch we buy-- which cuts down on weed seeds and other undesirables that can come in with imported material. The leaves don't have to be shredded to be used as mulch, but many people prefer that look.

Debris from seriously troubled plants: Off to a hot compost

So, shred away. Just try to keep diseased stuff out of the mix, by sending anything suspicious to a hot compost. (Yard waste collected by garbage companies goes to a hot compost.) The heat of a compost kills bacteria, fungi and insects or insect eggs.

Things we consider suspicious: Leaves and stems that discolored and dropped off prematurely, or those from plants that were very poor performers -- puny or malformed. Plant problems have very descriptive names, such as powdery mildew, scab, rust, tar spot, blotch, leaf miner and leaf skeletonizer. We watch now for the telltale marks left by these insects and diseases. (Look at those names and each problem's appearance in Key Words Unlock Problems.)

Don't over-think this or be too worried about it. You'll know bad when you see it. If it's just a few bad leaves or stems here and there, that's normal and should not cause you great concern. 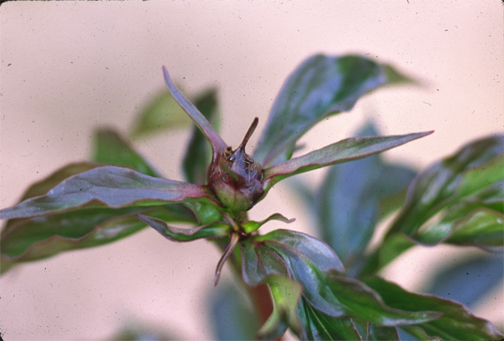 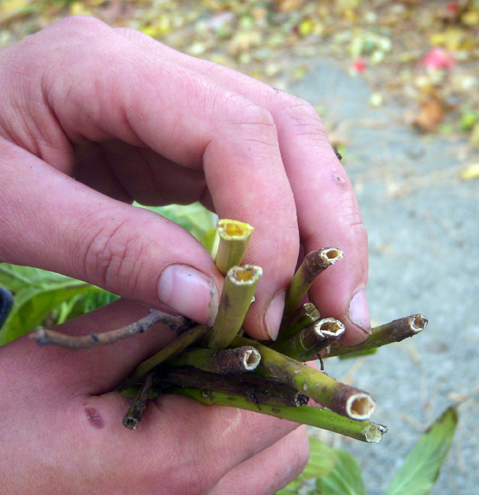 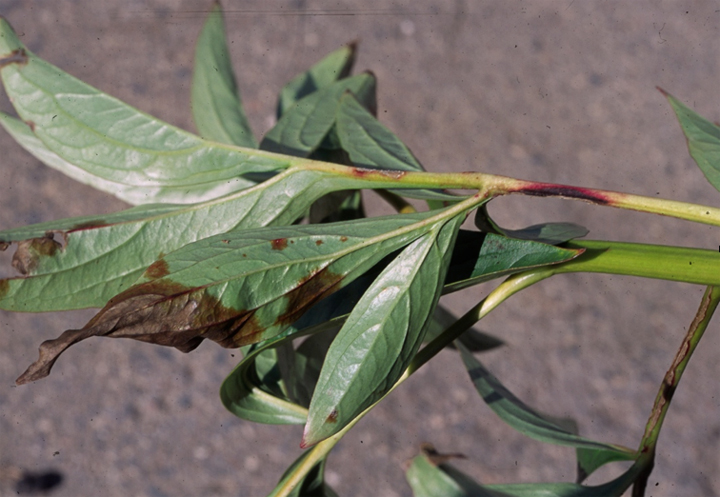 Above: We've learned to watch for spots, streaks, aborted flower buds and discolored stem bases on peony. More on this fungus called Peony Botrytis in issue #116, issue #88 and Grow 572.

Below: You'll know trouble when you see it. Let's say all the other hostas you cut and weed around in fall still had leaves attached (A), with good sized buds formed and forming (B), and then you came across a hosta with no leaves, almost no visible bud (C) and many remnants of decayed stem bases (D). You'd know that second hosta was in trouble. Best move: Just get rid of it. (More on Hosta crown rot through University Extension bulletins.) 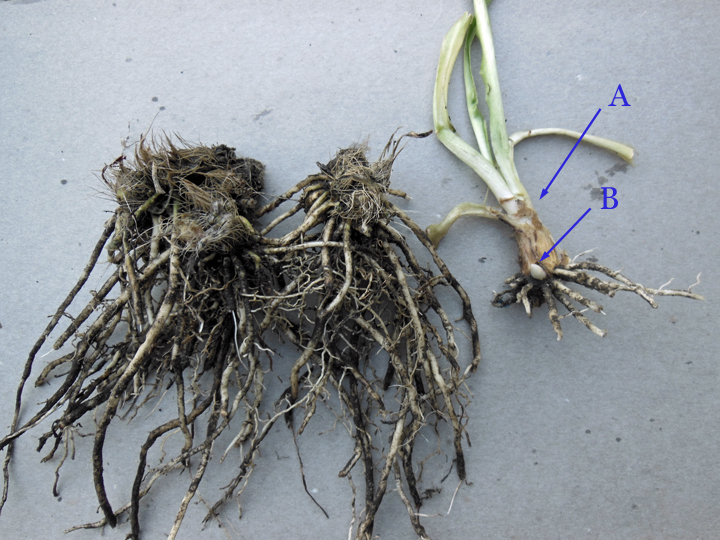 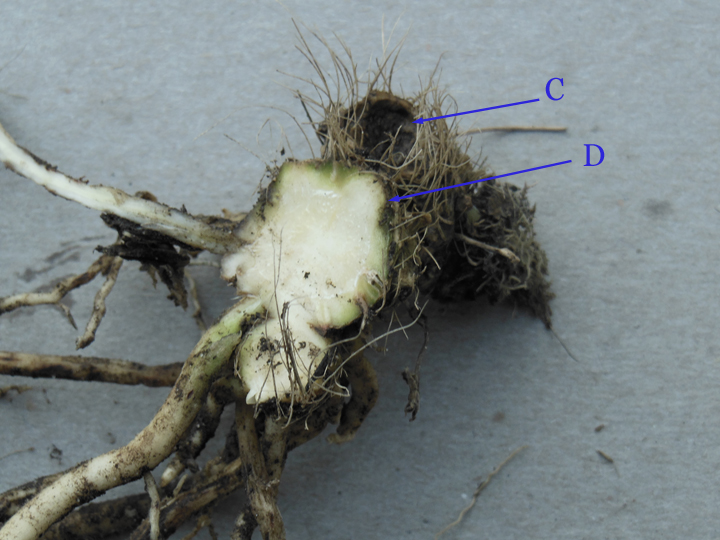 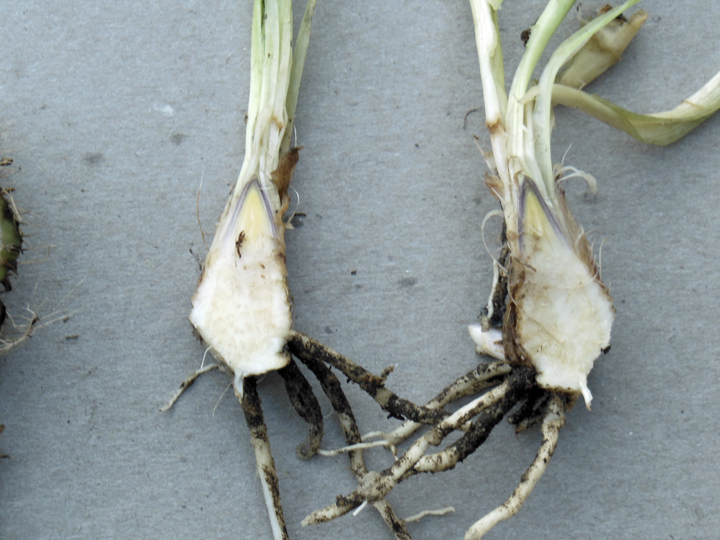 In fact, allowing a little of the bad to remain is a way of helping plants keep fighting their own battles so we can stay out of the mix. Most plants do cross paths with their pests but also carry their own solutions in the form of beneficial fungi and eggs of predatory insects. So the odd stem and leaf that shows just a little damage is almost certainly hosting the solution as well as the pest. Both will overwinter and trouble will probably remain in check. The trouble we clip and take away is whatever we see that was extensive, an indication that plant couldn't control the problem on its own.

Our steps in garden clean up are listed in The Art of Fall Garden Clean up, downloadable here.

For hands-on learning, check our calendar in fall for our Garden by Janet & Steven hands-on free sessions. Come cut with us!