Simple words are key to unlock pest and disease problems

This article really needs a Sponsor!

1) Focus on the part of the plant expressing symptoms:

• foliage and fruit or
• branches, canes, or
• water-conducting system, or
• roots.

2) Choose two or three words to describe what you see. You might scan/search the appropriate list below (use chart, or Search) to find words that fit what you see, such as curl, sooty, wilt.

4) Use that combination of plant name and description to search a book's index, this site or the Internet. Try your Internet with the "Images" option selected, as well. 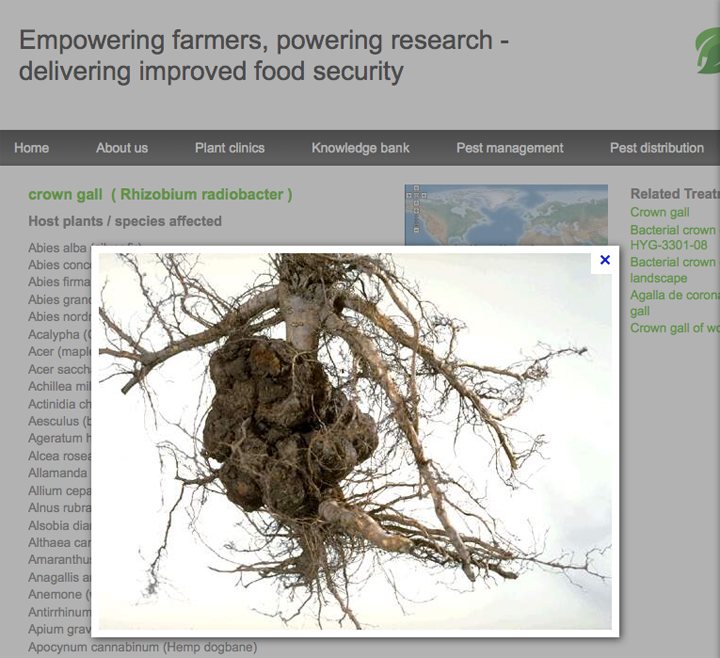 The Internet is a wonderful tool.Working from a Search engine's "Images" page there's gold to be found from a plant name plus a description of a troubling thing. In this case Abies concolor (white fir) plus gall (or deformed root would have worked) offered us many possibilities, including this news that crown gall affects fir http://www.plantwise.org/?dsid=3745&loadmodule=plantwisedatasheet&page=4270&site=234

Borer (Insects) Insect hatches within or chews into a growing shoot, stem, leafstalk (petiole) or twig. Hollows out the petiole or eats the growing point within the shoot. Leaf may drop off. Shoot usually becomes distorted and may die above the borer's location.
maple petiole borer, corn/aster shoot borer, squash vine borer
More, in What's Coming Up 140 and in Borers list...

Chlorosis. (Nutrient deficiency.) Veins and/or portions of leaf close to petiole normally colored or at darker green than tissue between the veins and along the margin (edge) of leaf blade. Not to be confused with overall, evenly-distributed paleness. What pattern or progression the chlorosis takes may be significant: whether new- or old growth is involved; whether a particular section of a plant becomes chlorotic first or is the only part of the whole that shows the symptoms; whether tissue becomes chlorotic and remains so or is first chlorotic and then necrotic/dead.
More about this symptom in tree foliage, at Chlorosis, a Morton Arboretum bulletin

Downy mildew. (Fungus.) Pale spots which then become dead spots. They usually appear first on upper surfaces of lower leaves. Spots turn color as they age, before becoming brown and dead.. While infected leaf tissue still alive, dry-downy patch of fruiting bodies is produced on leaf underside. Does not easily rub off because it is growing from within the leaf.
downy mildew of rose
downy mildew of impatiens

Mines, miner, mining. (Insects.) An insect larva is laid as egg within a leaf, then chews between upper and lower leaf surface creating feeding trail or "mine" of more or less distinctive pattern.
holly leaf miner, birch leaf miner
More, with miner pictures in What's Coming Up 140

Right: The stem of this monkshood became infected by a bacteria that caused a spot on the leaves. The infection spread down the stem into the root/tuber. The same bacteria is at work in a leaf spot, stem rot and root rot.

Rust. (Fungus.) Fruiting stage of the fungus is rusty in color and appearance, often on the underside of blemishes.
pine blister rust, wheat rust, cedar-apple rust, cedar-hawthorn rust
More, in What's Coming Up 119

More, with other problems illustrated, in a Powerpoint presentation of common plant diseases, from North Dakota Extension 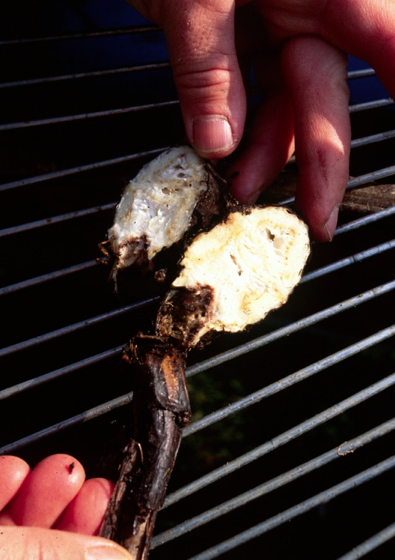 Scorch. (Fungus.) Margins or other portion of leaf scorched as if sunburned. Often, these are opportunistic infecti0ns following some environmental damage to the plant.
For more, see What's Coming Up 137.

Shothole. (Various.) Centers of blemishes created by insect, disease or environmental damage eventually dry and fall out, so leaf appears as if peppered by shotgun.

Smut (Fungus.) An infection that causes the plant part to look smudged, gray. Most often on members of the grass family
corn smut, violet smut

Spot. (Fungus.) Blemishes, often with modifier, such as black-, purple-, ink-, greasy-, leaf-, flower-spot. Dead spots of specific size, shape, often in particular area on leaf or on plant. Margins of a spot may be more or less distinctly colored, and with more or less sharp division between living/dead tissue. Margin's existence or color, or presence of fruiting bodies are often telltales to spot type. Multiple spots may coalesce to patches that have lost the diagnostic telltales so observation in early stages important.
black spot of rose, septoria leaf spot, viburnum leaf spot
For more, see What's Coming Up 137. 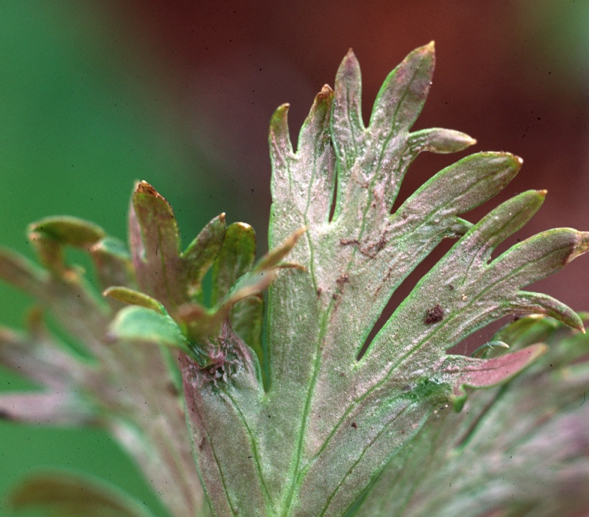 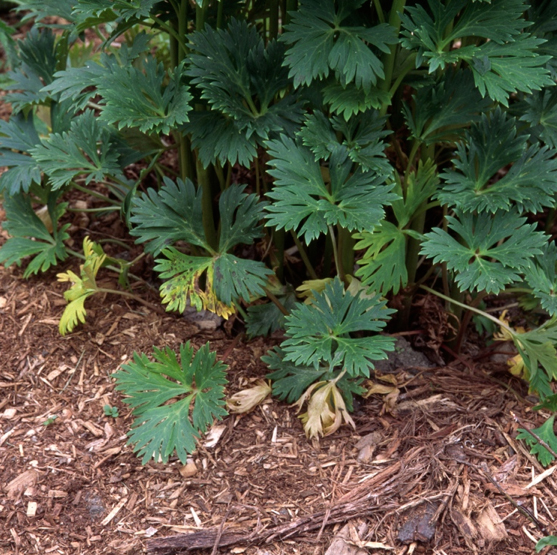 Above: A bacterial leaf spot has infected these monkshood (Aconitum) leaves and is consuming each leaf. The infected spots show as dark spots on the upper leaf surface, but appear pinched and blistered on the leaf underside.
See also Stem Rot, further up in this list, for an additional consequence of this infection.

Stippling. (Sucking insect damage) Leaf surface has many tiny damaged areas that make it look dry and pale. Where there are many tiny damaged spots they may coalesce so a whole section of the leaf turns brown or colorless and crumbly. Caused by mites, lace bugs, and other insects that suck rather than chew.

Right: This leaf from Harry Lauder's walking stick (Coryllus avellana 'Contorta') has suffered a summer of sucking damage by alder lace bugs. From a few feet it may appear to be coated with powdery mildew but this closer look shows the leaf tissue itself has gone white. 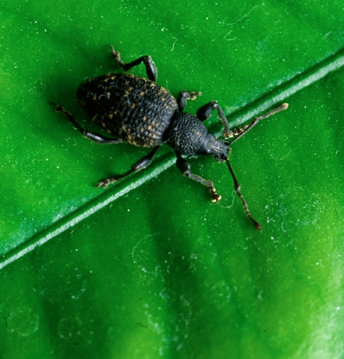 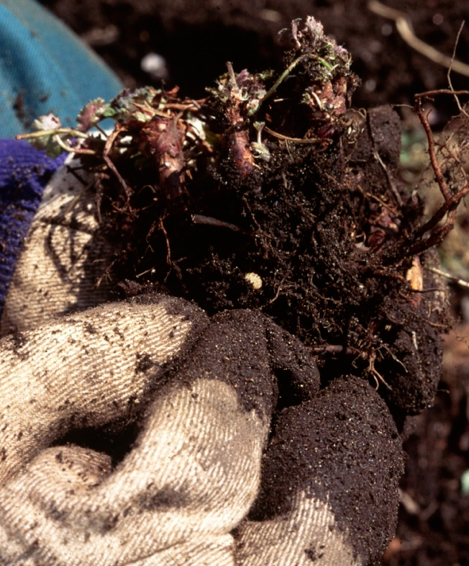 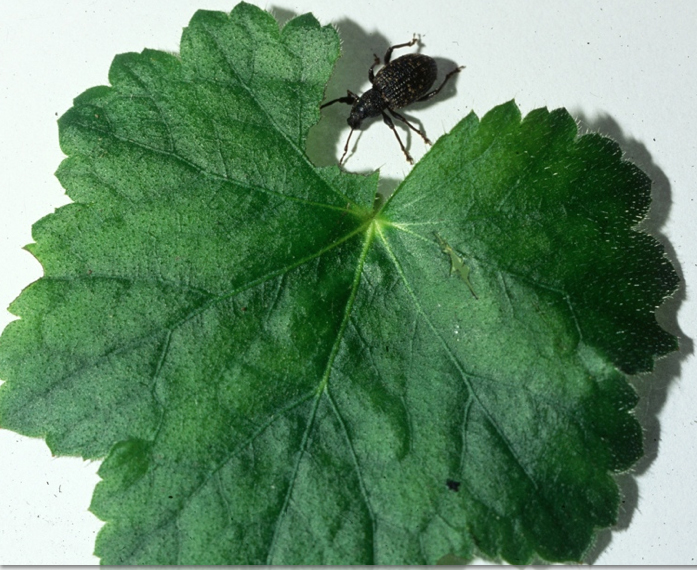 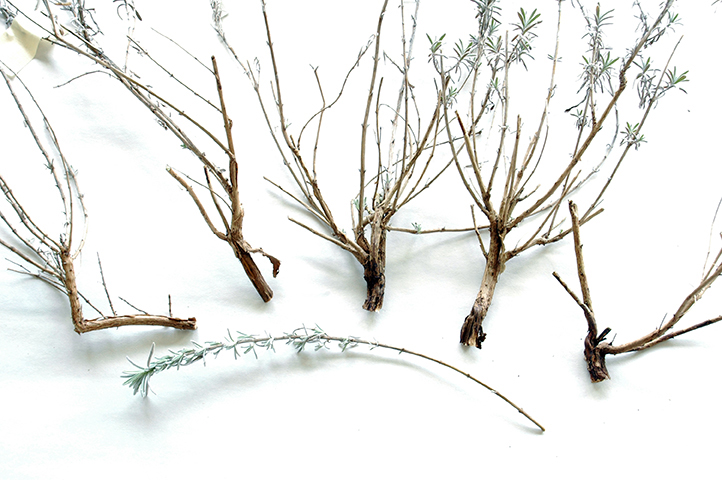 Canker (Fungus, bacteria) Dead spot in woody tissue. Cambium below bark destroyed. Surface more or less sunken, bark eventually sluffs off and dead spot may enlarge and split as disease spreads in cambium from original point of infection. May enlarge over years to girdle the stem. Infection usually begins in a spot on a young shoot that was not yet woody, caused by the same fungi or bacteria that also cause flower- or leaf spot on that plant's foliage or flowers. A canker's longer life, existing as it does on a part of the plant which will become woody, distinguishes it from "spot."
stem canker, nectria canker of honeylocust, phomopsis canker of juniper twigs, distinctive rows of canker in Eastern filbert blight

Above: All of the older lavender twigs here are struggling to grow because their stems have canker wounds.
Right: Arrow points to the scrap of bark and live cambium that remains on one stem. It will soon be girdled completely as the fungus increases its spread. 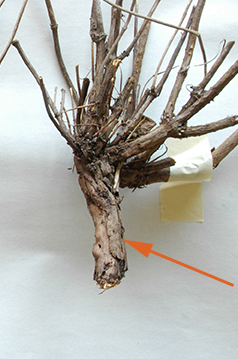 Frost crack. (Environmental.) Crack in otherwise healthy layers of wood, usually caused when wood overlays internal damage and there are rapid changes in temperature that cause cells to swell with water, and then suddenly freeze.

Rot. (Fungus.) Infected tissue softens, darkens and then shrivels. Dormant or basal buds of a herbaceous plant may succumb to crown rot. Might involve base of woody cane with infection and symptoms occurring unseen under bark. May occur in center of old wood. May affect root tips or damaged roots.
crown rot, collar rot, butt rot, heart rot, root rot

Right: The wilted stems on this Silver King artemisia are the result of root rot. Below, right: Janet holds three stems from that plant, one without wilt, one very wilted and one intermediate. Notice the uppermost stem, which is the most wilted. It has lost all its roots to rot. However, in this case the primary cause of trouble is not the rot fungus but a drainage problem that predisposed the roots to infection. 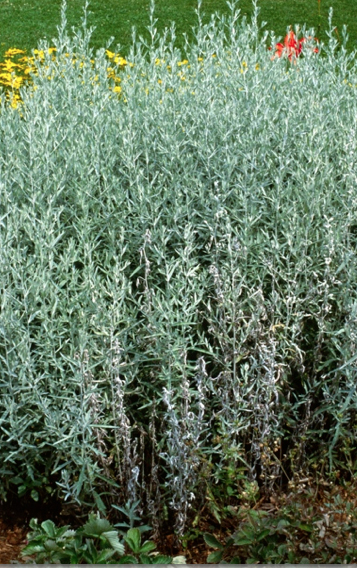 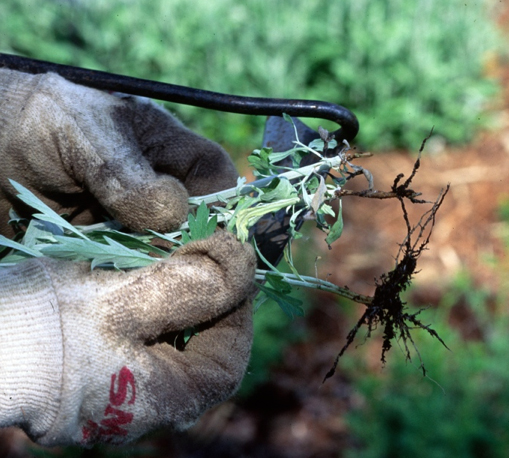 Scale. (Insect.) Sucking insect of young wood, may congregate as adults on trunk.
beech bark scale, pine bark scale
Below: Lecanium scale on (left) honey locust and (right) purpleleaf sand cherry. Notice the fuzz on the sand cherry. It's cottonwood seed fluff and other windblown debris trapped by the sticky honeydew excreted by the scales. 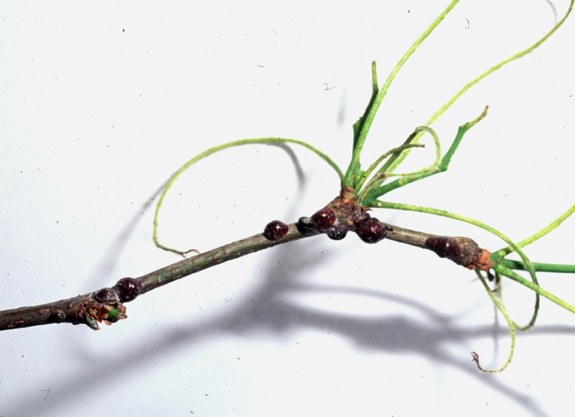 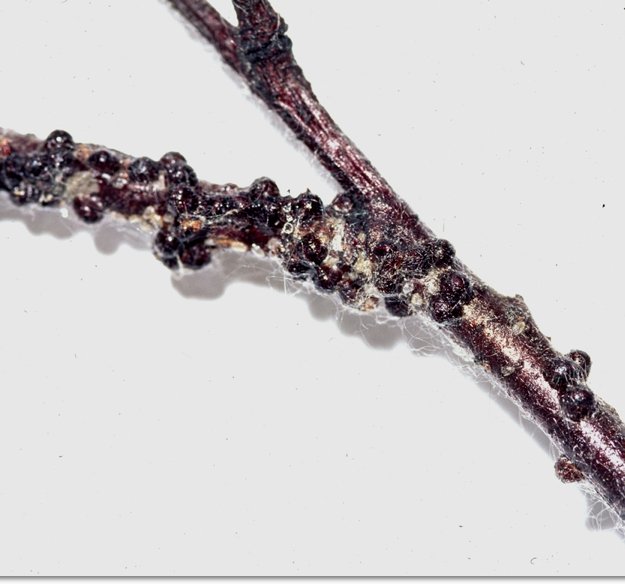 Shakes. (Various) Bark separates from wood beneath in unhealthy fashion. Usually associated with decline, infection or destruction of cambium below that bark.

Borers in the roots:
Iris borers are many gardeners' first introduction to root dwelling insects.

Girdling root. (Environmental, cultural and/or genetic.) Presence of growing root across or around other roots or trunk causes obstruction to growth.
some species seem prone to girdling root: Norway maple, silver maple
Numerous articles on this site illustrate girdling roots, symptoms, and treatment. Use "girdling root" as your search terms.

Mushroom. (Fungus.) Its presence is evidence of advanced wood rot. Each type of mushroom is distinctive in shape and color according to the fungus species, as flowers are distinctive in plant species. Causal fungus can be identified by its mushroom; e.g. dead man's fingers is a fungus that infects injured live roots.

We have many more links and photos that could be added here, but we also have many more articles to post, and limited time. So we're leaving this page for now. If you would like to see this topic given more detail, and/or if what we have already placed here helped you, please consider sponsoring this page!

Your Sponsorship of specific items on our website helps us set priorities and gives us the resources to do more. 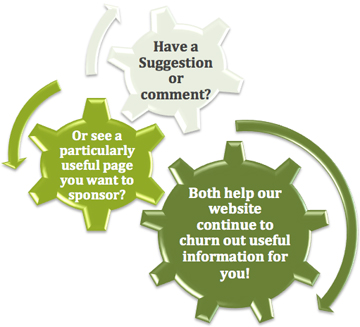